One of my Real American Heroes! 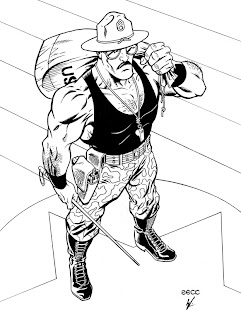 I have been becoming an ever increasing fan of Mike Zeck in the past few months. I always really appreciated his Punisher stuff. In fact he did the very first graphic novel I ever picked up, Punisher: Circle of blood. I study this book almost every day. But I have also come to find out he did a large number of covers and comics I loved and cherished as a kid in the 80's. G.I.JOE was a major player in my life and I was studying his artwork on those books even before I ever picked up a pencil to draw. His work with John Beatty are some of the most impressive I have ever seen. So when I had some spare time, I had to give this piece a shot. Inking this was exciting and incredibly fun. I felt just like that 10yr old kid looking at those comics for the first time.
Posted by eltoromuerto at 11:18 PM