You came and you gave without taking... 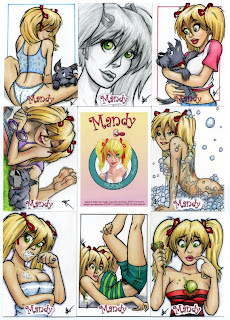 Last month I was contacted by 5Finity to do some sketch cards for a few sets. The first was for Dean Yeagles Mandy character. Now I love Deans stuff and I have four of his sketchbooks that he releases every year at SDCC. So need less to say I was very excited to take a shot and doing my version of the character. I don't know how successful they were but here they are non the less. I had a good time doing these and playing with markers and color pencils was so very nice to get back to. Hopefully I didn't shame Deans work too badly. You can probably check with 5Finity on how to get one of the sketch cards from me or some of the other great artists involve. You might even get lucky and get one from the great Mr. Yeagle himself.
Posted by eltoromuerto at 12:53 PM

Hey, Jason. I'm the lucky owner of Bubble Mandy. It's awesome! Previously I had only seen your inking of Matt Hebb's pencils. What a revelation. Congrats!

Well, Congrats on that card! That is my favorite of the bunch. I think your one of 5 people to get one from me. I got back 3 of them as Artist Exclusives. Thanks again and I hope you enjoy it!

Thanks, Jason. I couldn't be so decisive myself. All 8 are terrific. (How does one contact you privately?)

You can reach me at eltoromuerto at yahoo.com