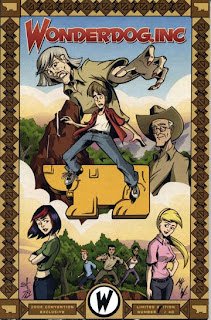 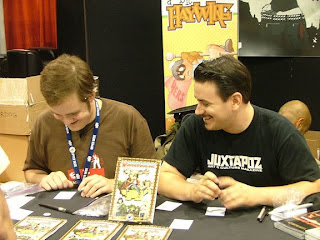 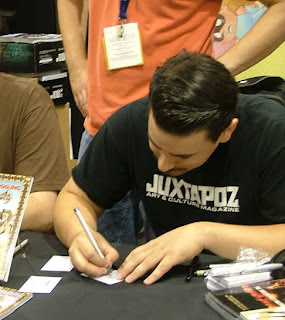 Well, the SD Comic Con has come and gone. And boy was it great! This was my first year where I was at a booth signing my own book. Matt, Tracy, Scott and I were on hand to sign the preview editions of the book. We managed to sell out of all the copies of the book with no advertising. That means that the only people who were buying the books were fans of Viper comics. My hope is that this book will do as well with fans when it hits the shelves later this year. Matt and I were also on hand to do some sketch cards for people. This was a lot of fun to actually work right along side of Matt rather than doing it via the internet like we normally do. Matts quick wit and humor were evident with all the close ups of some of the more notable super heroes in the business.
There was also a good bit of scouting by movie and television types at the con. So who knows if something like that will take place. But all in all, the con this year was really something to remember. I look forward to getting back to work and inking up even more pages for Matt and the Viper crew. I also managed to drop off some sample ink packets with a couple of companies. Some rejections and some are still out. But no worries, I have plenty to do in the mean time. Well more to show and tell in the coming days and weeks.
Posted by eltoromuerto at 10:27 AM

That's awesome, dude! Congrats!! :D Sorry we couldn't be there to support the cause.. But maybe we'll see ya around next year. :)

Nice. Dang it I was there too and I missed you guys. Maybe next time.
Great mustash Jase...

God damn i love the mustache, im sorry i missed you in action.

Hey, thanks everyone!
Having you all support me here is far greater a thing! Besides, the way things are begining to fold out I will probably be doing the same next year too. Woo hoo!
And much love for the mustache fans!